Starting in the SPRING of 2023, Laramie Lofts of Peoria, IL. will begin White Dove Release for funerals, weddings, and other events in the Galesburg, IL. area. Birds in that location will have to be released 1 1/2 hours before sunset times.

at January 12, 2022 No comments:
Email ThisBlogThis!Share to TwitterShare to FacebookShare to Pinterest

Starting in the SPRING of 2023, Laramie Lofts of Peoria, IL. will begin White Dove Release for funerals, weddings, and other events in the Bloomington Normal IL. area. Birds in that location will have to be released 1 1/2 hours before sunset times.

at January 12, 2022 No comments:
Email ThisBlogThis!Share to TwitterShare to FacebookShare to Pinterest

HAVING A DOVE RELEASE FUNERAL SERVICE 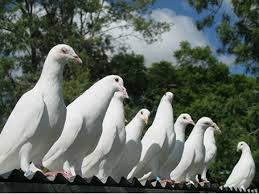 When a white doves are released at funerals, it symbolizes the releasing of the spirit of the loved one. The dove release ceremony often helps those who are mourning a loss "release their loved one" in a special way, thus helping the grieving process.

Dove releases are commonly done in weddings, but funeral white dove release services are seeing an increase in the practice as well. In this article, we explain some things you should know if you are planning a dove release funeral.  However, first, we take you through a brief history of releasing white doves at funeral and other ceremonies.

Since the 5th Egyptian Dynasty, about 4.5 thousand years ago, releasing white doves has been a tradition for expressing love and inspiration. Older world customs in Europe released doves during weddings to symbolize peace, love, blessings, and prosperity for the new couple. At funerals, it was used as a freeing of the spirit.

In the Chinese culture, white dove releases are regularly practiced to ward off evil. Doves represent long life and peace.

In mythology doves also play a huge role. They were associated with gods and considered sacred. Doves were given as gifts by the ancient Romans and Greeks. They are considered to be devoted, loyal, honest, and trustworthy. The release of white doves was an emblem of devotion, love, and caring. It served as the sacred animal of Aphrodite and Venus, the goddess of love.  In ancient cultures, the groom gave a dove to his bride. It symbolized his promise to care for her and her family.

Why Release Doves At Funerals

Depending on the ceremony, a dove release represents different meanings. At a wedding, a dove release brings joy, inspiration, and uplifts. Typically released by the bride and groom, the doves flying off together represents the couple beginning a new life together.

In the case of a funeral service, many families decide to release doves as a last tribute to the deceased. Pure white doves symbolize the soul of the deceased as he or she passes into the heavens.

What Happens To Doves Released At Funerals?

The release of the doves is the final part of the funeral or memorial service. Often the family wants to recite a poem or scripture while the white funeral doves are being released. Because the doves are a particular type of homing pigeon, upon release, they fly into the sky and then back to their home.The funeral doves have been trained to fly home from many distances.

Here at Laramie Lofts we train our birds daily and they fly here at the lofts daily. These birds can make it home from 100's of miles away, but we use them for releases only within 50 miles of Peoria, IL. The birds most of the time are home within 30 min. or less.

The typical costs to release doves vary on the number of doves you want to be released.

These prices are averages and depend on the dove release company that you use.

In addition to paying for the doves for a funeral or memorial service, you should expect other business charges such as: travel fee if your not located in the Funeral Dove Release Company service location.

If you are deciding to have a dove release funeral for your loved one, it is essential to mention the time of day and consider the anticipated weather the day of the service. Typically funeral dove release companies will not release their doves in near dark or dangerous weather.

If you are interested in throwing a dove release funeral or memorial for your loved one, you should check out Laramie Lofts White Dove Releases located in Peoria, IL. 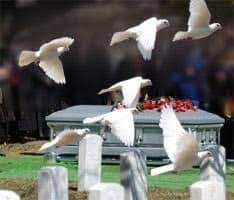 Funeral homes offer many special features and options for a truly unique memorial service. One popular tribute is a white dove release. We have pure white doves for release at Funerals and memorial services. A Graveside service with a ceremonial white dove's release.

How many doves should be released at a funeral?

How many doves should be released at a funeral?

Releasing white doves at a funeral or memorial is perhaps one of the most impactful last tributes. At Laramie Lofts White Dove Releases, we do far more dove releases for funerals and memorials than we do for any other event. Here are a few considerations when deciding on the number of doves for a funeral memorial for your loved one (besides the most common choice of three funeral doves).

While the last idea might be simple in the sad case of a child’s passing, what if the deceased enjoyed a long and happy 90 years? Here again, we have many ways to personalize the release of funeral doves. Think back through your loved one’s life and consider releasing funeral doves for every decade of the person’s life or for other milestone events. This is a beautiful tribute to the accomplishments and beauty of one’s time on earth, and works well for Celebration of Life events and other such memorials.

While the general rule of thumb is “the more doves, the more spectacular the sight and effect”, in the end, the number of doves will be whatever is most meaningful to you and your special event. Visit Laramie Lofts Funeral White Dove Release